On May 23rd, the “cohort of cohorts” of Shaharit’s 120 program for emerging multicultural political leaders came together for a an open and honest conversation with four influential political leaders: Avi Gabai, Moshe Feiglin, Orly Levy-Abukasis, and Rachel Azaria, during which they talked about about the leaders’ personal journeys into the political system and had a candid discussion about the nature of Israeli politics.

The members of the 120 program gained both a glimpse into the current state of Israeli politics and a glance into its close and distant future, something that is particularly relevant as the next national elections, scheduled for 2019, approach.

“The political system can be changed!” explained Gabai, the former Minister for Environmental Protection and a candidate in the upcoming Labor Party leadership primaries. “I know that it’s possible to change the culture [of a political party], but only if you stand at its head… if you’re number two you won’t succeed,” he added. “It’s easy for politicians to blame the system, but they forget that they’re the ones who created it with their deal-making and poor decisions. The things that surprise me the most in politics are the ability of politicians to lie straight to your face and their obsession with being reelected.”

MK Orly Levy-Abukasis (Independent) addressed the subject of education: “We must see the education budget as an investment and not as an expense… anyone who wants to enter into politics must remind themselves every day why they got into it. The system works based on written rules, and you are forced to adjust yourself to these rules no matter what. Many idealistic people have lost themselves within the confines of the system.”

Former MK Moshe Feiglin of the Likud party said that “Politics must be based on ideas and not on people… in order to succeed, you need to be a leader and to answer a real need. That’s the whole story.”

After the meeting with these political leaders, the members of the 120 “cohort of cohorts” split into smaller breakout groups, discussing their thoughts, ideas, and plans leading up to the 2019 national elections; afterwards they met with MK Rachel Azaria (Kulanu) for an intimate conversation about her political journey. Current 120 participant Alex Rif interviewed Azaria, who spoke with humor and refreshing candor about her current legislative efforts, which focus on family-friendly legislation, as well as about the personal, familial, and professional challenges that she has faced as a Knesset Member. 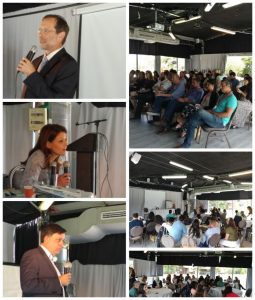