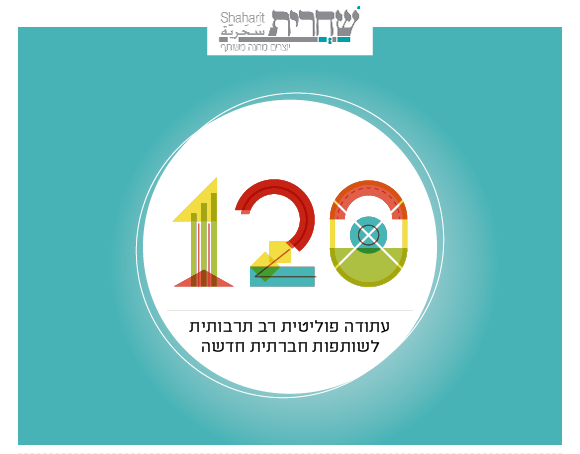 The 120 is a multiyear-long initiative, begun in 2014, to build a cadre of young multicultural national political leadership that can help change the fabric of Israeli politics and promote a public discourse based on promoting the common good. The program, currently in the midst of its fifth cohort, is envisioned as one single network, with 20 additional leaders joining the program every year.

Our participants come from a variety of political backgrounds and from all of Israel’s diverse communities: Ultra-orthodox,Modern Orthodox, Arab, Religious, Secular, Mizrahi, Ethiopian, Ashkenazi, Bedouin, Druze, Immigrants from the USSR, and more. What unites them is their passion for change, leadership ability, and aspirations to influence national politics.

Over the course of their 120 cohort year, participants attend eight two-day seminars, gaining in-depth exposure to the basics of Israeli society, politics, and economics. These seminars are formulated with an eye towards the hot-button issues that will dictate Israel’s future, as we reframe the tired dichotomies on subjects like the relationship between religion and state, between Jewish and democratic values, between a market economy and a welfare state, and between peace and security, among others. Participants are exposed to Israeli politics and politicians from up-close, spending a two-day seminar at the Knesset and holding intimate, “Inside the Actors’ Studio” style conversations with leading national politicians.

A highlight of the year is a late-spring eight-day long trip to Morocco, in which participants analyze the meeting of identities and cultures in a fellow Middle Eastern country’s history and compare it to the Israeli context. We specifically chose Morocco due to its similarities with Israel – majority/minority relations, issues of religion and state, long-term territorial conflict, Jewish/Muslim partnership, and tensions between tradition and modernity, just to name a few – and location as a gateway to both the West and the Middle East.