This week, Shaharit’s senior fellows program, made up of ten key thought leaders that bridge the dichotomies in Israeli society, launched. Fellows come from the range of communities present in Israeli society, a range of political, ethnic, and religious backgrounds, and all of them are committed to building a common good intellectual language and infrastructure. In 2019, fellows will focus on writing four position papers on areas critical to building a common good future that works for all – possibilities include Shabbat in the public sphere, education, and housing. Fellows are also committed to producing two op. ed. pieces a year, writing multiple social media posts, and to running monthly “Spoken Shaharit” events to expose the wider public to our ideas and models.

Read on for bios of our fellows and a picture from their first meeting! 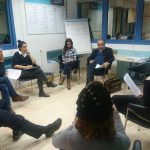 Natalie Levy, Senior Fellows Project Coordinator, was born and raised in Jaffa. She is a PhD student in sociology at Tel Aviv University and a social activist. She holds a BA and Teaching Certificate in political science and an MA in sociology and anthropology, both from Tel Aviv University. She has worked in the field of conflict resolution, community development and education for the past decade in a variety of non-profit organizations, with her doctoral work, for which she received the President of Israel’s Prize, focusing on comparing intentional versus “accidental” Jewish-Arab schools. For the last three years, she has led organization of lecturers and adjuncts at Tel Aviv University, and she is active in organizing university and college lecturers in Israel to improve their employment conditions.

Dr. Adam Tsachi is a lecturer in film at Herzog College in Gush Etzion. His doctorate, from Tel Aviv University, focused on fair representation in Israeli documentary filmmaking. He holds a BA in education and Israeli thought and an MA in comparative literature, and is a musician, screenwriter, and creator. He served as the spokesperson for the Gush Etzion municipality and worked as an educator at the Rashit school. A resident of Tekoa, he is married and the father of four.

Rabbi Bezalel Cohen is dean of Hakhmei Lev, a Haredi yeshiva high school in Jerusalem. He is a graduate of the Mandel School for Educational Leadership at the Mandel Leadership Institute and has worked to promote employment for Haredim as well as their integration into the IDF and institutions of higher education. He writes and lectures on the Haredi community and leads discussions and dialogues with individuals and groups both within and outside this community. He serves as chair of Shaharit’s Board of Directors.

Dr. Hanin Majadle is a social worker, educator, and social activist. In recent years, she served as a lecturer at Al Qasemi College of Education in Baqa al-Gharabiyye. Before that, she directed the Jerusalem Foundation’s work in East Jerusalem for four years, working on the development of the city in the areas of education, health, and welfare. She also ran the East Jerusalem residents’ rights center and worked as a social worker at the Ellin children’s hospital. She helped found an NGO to promote volunteering in the Arab community, and has a teaching certificate in psychology and sociology, a BA in social work and an MA in NGO management, and a PhD in social work which focused on the relationship between religion and gender, all of which are from the Hebrew University in Jerusalem. Today, she is a Fellow at the Mandel School for Educational Leadership.

Nazir Magally is a writer and journalist who lives and works in Nazareth. He served as editor-in-chief of Al-Ittihad, Israel’s only Arabic-language daily, and taught at Ben Gurion University. He taught investigative journalism at Birzeit University and was a presenter on Channel 2. In 2013 he joined the Abu Dhabi research institute as a fellow. He presently is a columnist about matters of Israel for the London-based newspaper Asharq Alawsat, and hosts a weekly radio show on the Mekan radio station. He frequently appears on Arab-language TV to discuss Israel and its relationship with the Arab world. He is a long-time activist in matters concerning the relations between Jews and Arabs in Israel and the region. In 2003, together with Father Emile Shofani he led a delegation of 500 Arab and Jewish notables from Israel and France to Auschwitz.

Malki Rotner is a Belzer Hasid, a writer and journalist, and the manager of the Ashdod based Merhav center for Haredi employment. She lives on the seam line between two worlds – the Haredi and the Israeli; as a social and communal activist, she works to create shared communities that cross sectarian boundaries, including Plugta. A resident of Ashdod, she grew up in the Haredi community of Tel Aviv, where she also served as the community connections coordinator for the Shorashim center for Jewish Identity. She studies history and sociology at the Open University.

Dr. Shlomo Fischer is a Senior Fellow of the Jewish People Policy Institute and teaches sociology and education at the School of Education at Hebrew University. His research interests include religious groups, class and politics in Israel and the relationship between religion, citizenship and education.  He has published extensively on religious Zionist ideology and on the Shas movement. He is the founding director of Yesodot – Center for Torah and Democracy which works to advance education for democracy in the State-Religious school sector in Israel. He is a graduate of the Mandel School for Educational Leadership in Jerusalem.

The Political Economy of Contemporary Populism