Cohort I of Shaharit’s flagship “120” program, which began in October 2014, concluded in mid-June with a session in Mitzpe Ramon. This program trains young leaders from the various communities in Israeli society who are willing and able to lead the State of Israel to be a different type of political cadre, one that questions the hackneyed dichotomies in Israeli society and politics. During the three-day concluding session, held in the desert, the fellows attended sessions on collaboration and the Common Good, spent some time alone in the desert, and planned their first group project–in addition to other exciting events.

Sagit Deri and Roi Grufi, two of the fellows, summed up their year as follows: The program brought together an impressive and extremely diverse group of men and women that represented most of the subgroups in Israeli society. It appears that an honest discussion that allows people to talk about what really pains them also generates a real ability to listen.

See here for more information on the “120” program and the members of the inaugural cohort. 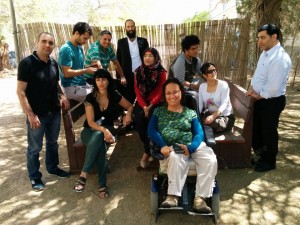