Thousands of people gathered at Zion Square in Jerusalem on the eve of the Jewish fast day of Tisha B’av (which commemorates the destruction of the First and Second Temples) in order to participate in an exciting and meaningful night of conversation and dialog. The evening, entitled “How Do We Create a Conversation? Division Building Society,” presented by the Jerusalem Movement and Shira Banki’s Way – which honors the sixteen-year-old tragically murdered at the 2015 Jerusalem Pride Parade – in partnership with Shaharit. Throughout the evening, a number of dialog circles took place, many of which were either led by Shaharit’s staff and fellows or in which they participated.

Dr. Eilon Schwartz, Shaharit’s Director, led a dialog circle together with Rabbi Benny Lau. Together, they tried to forge a path to the common good. Rabbi Bezalel Cohen, Chair of Shaharit’s Board, spoke about the crisis in the Haredi community and the gaps between the older and younger generations within it while participating in a circle together with religion scholar Dr. Tomer Persico.

Following the event, Senior Shaharit Fellow Tehila Friedman wrote that “Thousands came to Zion Square. They read from the Book of Lamentations in both the Ashkenazi and the Aleppo style, and then sat in circles in order to talk. For many of them, it was the first time they read Lamentations. For many others, like me, it was the first time they read it outside of a synagogue. There were Haredim. There were secular people. There were religious people. There were traditional people. There were Jerusalemites. There were even some Tel Avivians. It’s easy to be cynical about these types of discussion groups and their ability to influence anything. But it’s also possible to remember the first night that we held a public mourning for Shira Banki. Three of us came to the square to sit Shiva, we didn’t know yet what our purpose was.

For with my staff I crossed this Jordan, and now I have become two camps (sides). – Genesis 32:11

It’s also possible to be excited. To know that exactly for this reason we created the Jerusalem Movement. So that this would be Jerusalem. Connected and connecting.“

Yuvi Tashome-Katz, Shaharit Board Member and the CEO and Founder of Friends by Nature, a national network of Ethiopian-led young intentional communities, led a circle together focused on ethnic discrimination together with well-known Mizrahi and social activist Reuven Abergel.

Dr. Gali Sambira, Head of Shaharit’s 120 Program led a circle that dealt with the role of academia in social change together with Sarah Heazni Hakohen.

And Avigail Karlinsky, a Haredi activist and 120 participant, led a circle together with Mickey Gitzin, the Israel Executive Director of the New Israel Fund.

In Tel Aviv, a special event occurred, in which members of the Combatants for Peace group met with a group of right-wing activists to discuss hate and love in Israel. 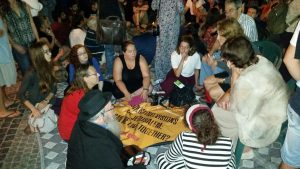 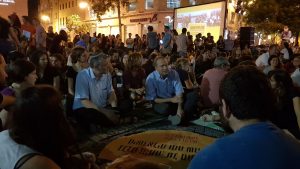 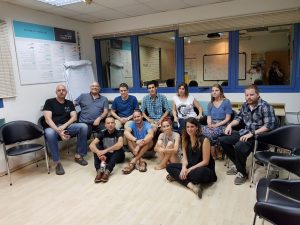 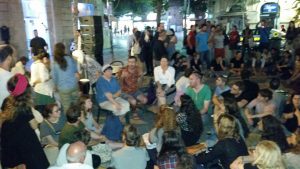 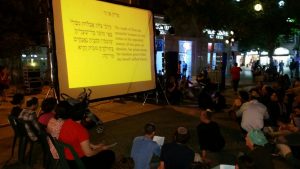 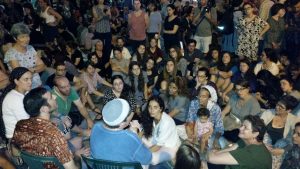 An Evening in Memory of Shira Banki