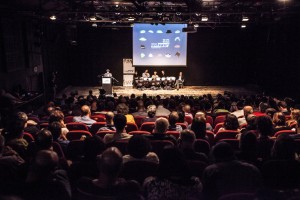 The 2014 Shaharit Conference, Creating a New Social Partnership, was held on November 2 at Na Laga’at in Jaffa Port.

The conference drew some 500 people, and several of the boldest and most interesting personalities in Israeli society spoke about the alternatives coming into being under the radar. They sketched some of the possible guidelines for a new partnership between the many diverse groups that make up Israeli society.

Adina Bar-Shalom addressed the opening session: We are living on autopilot. Almost without free will. We separate and alienate ourselves and retreat within ourselves. We have been granted the divine gift of free will and we should embrace it. The gulf between Jews and Arabs; secular, religious, and Haredi Jews leads to segregation, and segregation leads to distance that only magnifies the stereotypes of others. It is easy to live with people like ourselves, but it is better to live among those who are different. Let’s strengthen our own identities and not isolate ourselves. It’s true that our lifestyle does not make sense to everyone else, but sometimes, we Haredim, don’t agree amongst ourselves. … But just as I demand that my fellow Haredim not force their lifestyle on others, I make the same demand of everyone else. For example, today, a Haredi woman who does not want to study with men cannot earn a master’s degree—because the suitable institutions don’t exist. Likewise, successful IDF programs for Haredim have suffered gravely since the new government took power. Criticism and pressure backfire—they lead to stagnation and isolation. Let’s sit down for a fruitful conversation that will allow is to live together with dignity respecting every person’s unique nature.

Ayman Udah, director-general of Hadash: People who don’t want to solve problems speak in slogans. All of us working together can have the conversation to create the programs that will close the gaps between Arabs and Jews. There has already been a successful attempt. Admittedly, the Rabin government did not recognize the national injustice, but it did recognize the civil injustice. At that time, Arab citizens felt a part of society. True, the conflict has its repercussions. There is a connection between the nationality to which we belong and the country in which we hold citizenship. But we can create a program that will allow us to play a part and narrow the gaps in Israeli society.

Prof. Haviva Pedaya: A call for peace need not be one that is tagged as coming from the Left. Peace is a basic human value that cannot be allowed to become owned by one particular sector or political camp. … During the summer, I organized protests in the South, because we need to act there—not only in Rabin Square.

Rabbi Ilai Ofran: Our greatest danger is extremism—of both kinds. On the one hand, laughing at any hope of peace. But we also should not take our hopes to the extreme. We cannot live with a worldview that is messianic and redemptive and that views hope as certain. I examine and reexamine how to proceed, and I know that the most important thing is doubt. Actually, the greatest danger that Israeli society faces is losing the ability to cast doubt.

Avirama Golan: I saw the [peace] demonstration in [Rabin] Square. It was made up of a group of people who are well-fed and set for life, rubbing up against money. A group of people who are “in” but aren’t “in” with anyone anymore who are saying “We’ve got a plan for you.” To whom exactly are you proposing a plan? Who’s listening to you anyway? This camp is religious, it follows the religion of neoliberalism. And by the way, they began the event at 7:30 P.M. As if they told anyone not from this camp—anyone not a secular believer in neoliberalism—“You don’t belong here with us.” Some of my criticism stems from the fact that this camp really is guilty for what happened to it. How can you get so excited by money and so distance yourself from the society above which you live? How can you get so drawn into such a small elite camp that talks with a small elite camp on the other [Palestinian] side—when neither is relevant anymore?

Eilon Schwartz: Two years ago, Shaharit decided to chart its own course. We call it the Common Good: A New Social Partnership. It demands one simple condition: making room for everyone—Jews and Arabs; secular, religious, and ultra-Orthodox. We are creating a contract between all of us who turn to one another and, on this basis, construct our children’s Israeli identity.

Yael Golan, conference coordinator: All of us here are asking what we can create when we try to build bridges instead of fences. What can we do together when we take responsibility for the future we pass on to our children.

The conference also included eight breakout sessions, including “Jewish Tradition and Human Rights” (representatives of ACRI and Shas in an open discussion on the ethical codes that shape Israeli society), “The Haredim are Coming” (changes in Haredi society and how this community can balance integration and maintaining its unique identity), and “An Arab Initiative” (on the need to change the political discourse in Israeli Arab society). The conference also unveiled our new flagship leadership program, “120”: A Multicultural Cadre of Future Leaders for a New Social Partnership.”

Shaharit seeks to reframe the dichotomous and sectoral attitudes that have shaped Israeli society since the country’s independence, and it presents a new agenda that can bring about new social partnerships between different groups and communities.

For pictures from the event, see our Facebook album.

Shaharit’s Conference on the Economics of Populism